An award-winning building – eco-friendly throughout

Visibility, participation and the environment are at the heart of Vattenfall’s headquarters. The building has won awards for its solutions for saving and recycling energy, and it carries the highest classification according the Sweden Green Building Council’s environmental certification system.

September 2012 saw the official opening of Vattenfall’s new headquarters, and the end result is a contemporary, eco-friendly property of a high standard, which serves as a workplace for around 2,200 employees.

The building is inspiring and packed with unique solutions with an environmental focus. For example, there are solar panels and solar thermal collectors on the south-facing roof, which supply the property with electricity and heating. The property also has a stonecrop roof with vegetation that reduces surface water run off, cuts noise levels, absorbs air pollution (which improves the urban climate) and provides insulation, which also saves energy.

The ground floor has both a gym and a full-size fitness hall, and there is also a communal dining area for restaurant guests and people bringing their own food.

Two objectives with the new office

“These days, if you want to be an attractive employer you need to have accessible offices with an environmental focus,” says Olov Larsten, Vattenfall’s project manager for the design of the office at Arenastaden.

The project had two objectives – for Vattenfall to appeal to prospective employees, and to be a frontrunner when it comes to the environment. In the run up to the move, property manager Olov Larsten put together a team of under 40-year-olds. The office was to be designed for young people, the people who would be involved in developing the company. The focus was on social aspects – how could we create a space with maximum scope for social interaction?

“I had an idea that I wanted to reflect the American campus feel, to constantly create places to bring people together. Conference rooms really, but it’s not these rooms that inspire creativity. It’s in the spontaneous encounters. We made a conscious decision to concentrate on a mix of project spaces, alternative workplaces, internal and external conference rooms and quiet office units.”
- Olov Larsten, Property Manager, Vattenfall

Arenastaden – where the skills are

Arenastaden also proved to be closest to prospective employees, which is an important investment for the future. Surveys revealed that many people with the relevant qualifications lived north of the city. And it was also the best location in terms of transport links, with the light rail and commuter trains in to Stockholm Central Station and to Arlanda Airport.

“We need to attract the best people in order to continue growing the business. We knew that people who are currently studying for their qualifications tend to live north of the city. And we used to be located partly north of the city, so it made sense to base ourselves here. We also merged three offices into one, saving SEK 40 million.”
- Olov Larsten, Property Manager, Vattenfall

The ‘staff living room’, which is what Olov Larsten calls the open space that connects the four buildings, has played an important part in creating a feeling of togetherness among the almost 2,000 employees. Archus arkitektbyrå, which designed the office building, explains that they worked on breathing life into the atrium, which can otherwise easily become a dead space.
The impression from Vattenfall’s former office was that you marched in and disappeared to your desk. Here there is plenty of movement, with views across the atrium and the rest of the office.

The aim is to enable employees to interact, despite working some way apart from each other. The building has a single entrance where everyone comes in, and all the communal meeting areas including the café, break and service areas such as post distribution are located around the atrium. Wherever you’re headed – to your own work station, to a meeting, to the gym or restaurant – you have to pass through the atrium square. Other employees are constantly visible on other floors and in other departments.

The property is made up of four interlinked buildings of varying heights, making it look like a sculpture. Light, glass facades lend the entire property a contemporary, unobtrusive look that is as open and welcoming as the street level and main entrance.

The four buildings have interiors that reflect the four elements: fire is orange, earth is green, and air and water are different shades of blue. The fifth element – the atrium – is in the middle, and is the ether that represents communication. The atrium brings the four buildings together and has to be passed whether you’re heading for your own workspace, to a meeting, to the gym or to the restaurant.

Archus Arkitekter’s concept of the open, efficient workplace of the future was built on the idea of an integrated external block structure creating a campus comprising several buildings, each with their own separate identity. The buildings are situated right next to Mall of Scandinavia in Solna’s Arenastaden.

Dividing the office into four separate buildings has meant the focus has been on creating a common theme in terms of materials, patterns and palette – a single whole with four components. Each one of the buildings has a different shape and volume in order to emphasise its individuality and convey the idea of a campus with separate buildings around a central atrium.

All the buildings around the atrium are reached directly via highly visible groups of lifts and a centrally positioned staircase right opposite the entrance and reception area. The atrium leads directly to a number of meeting rooms, touchdown areas, the gym, fitness room, restaurant and back office functions. The ground floor also houses premises for external tenants such as a restaurant, café and other traditional urban businesses. These can be accessed from the atrium and from the surrounding streets depending on opening hours and how much access Vattenfall wants to its own activities.

The floors above house contemporary offices. There are virtually no pillars or other fixed structures in the office spaces. Each office floor can be separated into four completely self-sufficient premises as needed. Various layout designs are possible for maximum flexibility regarding different combinations of traditional offices with workrooms and completely open layouts, without affecting the building’s structure or installation solutions.

The entire block – with its light glass facades in white and green – gives a contemporary, unobtrusive impression. The sections between the individual buildings form a window between the dynamic world outside and the inner space in the atrium and its activities. The building gives off a different vibe at different times of the day. During the day, the surrounding buildings are reflected in the facades. The sky and sun are reflected and the light is drawn downwards to street level. This lends the buildings an open and welcoming feel. In the evening, the light spreads from the atrium through large glass sections out towards the street, highlighting the entrance to Vattenfall. Each building has a different height to create an interesting sculptural effect. The building heights from the street interact with the residential units above Mall of Scandinavia. Besides offices, the property includes parking, a restaurant with outdoor seating, conference rooms, an auditorium, gym and exhibition space. 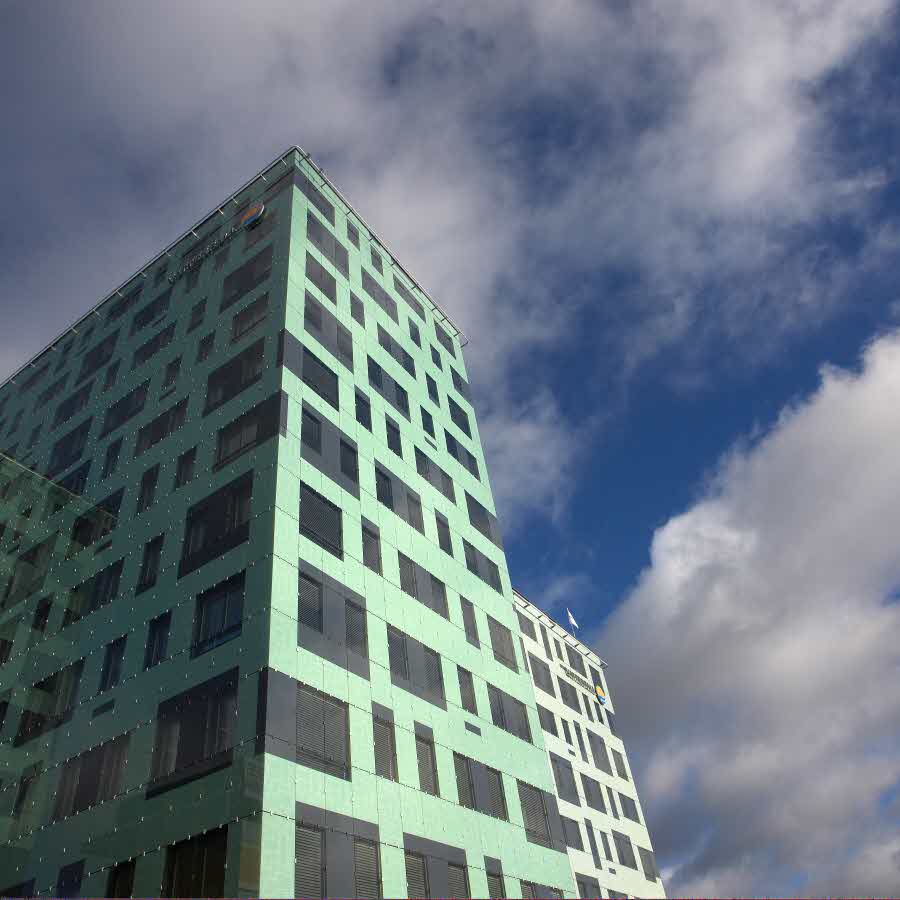 Vattenfall’s head office is a magnificent building and a landmark in Arenastaden. 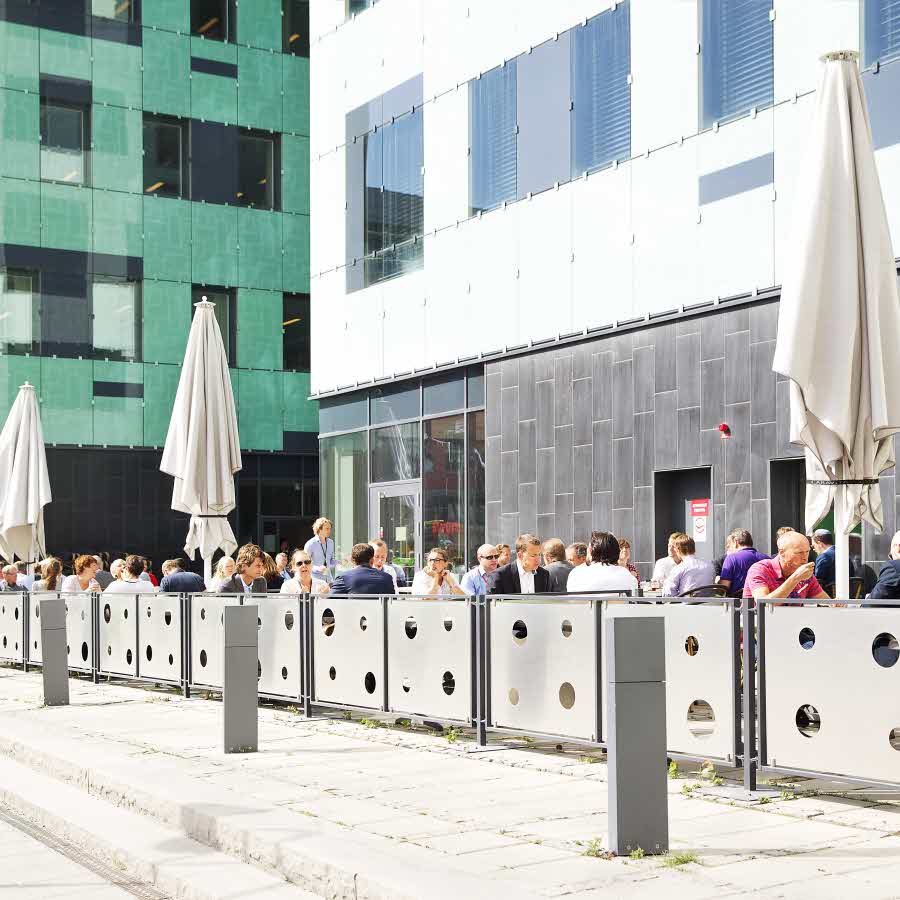 The property has a restaurant and attractive outdoor eating area. 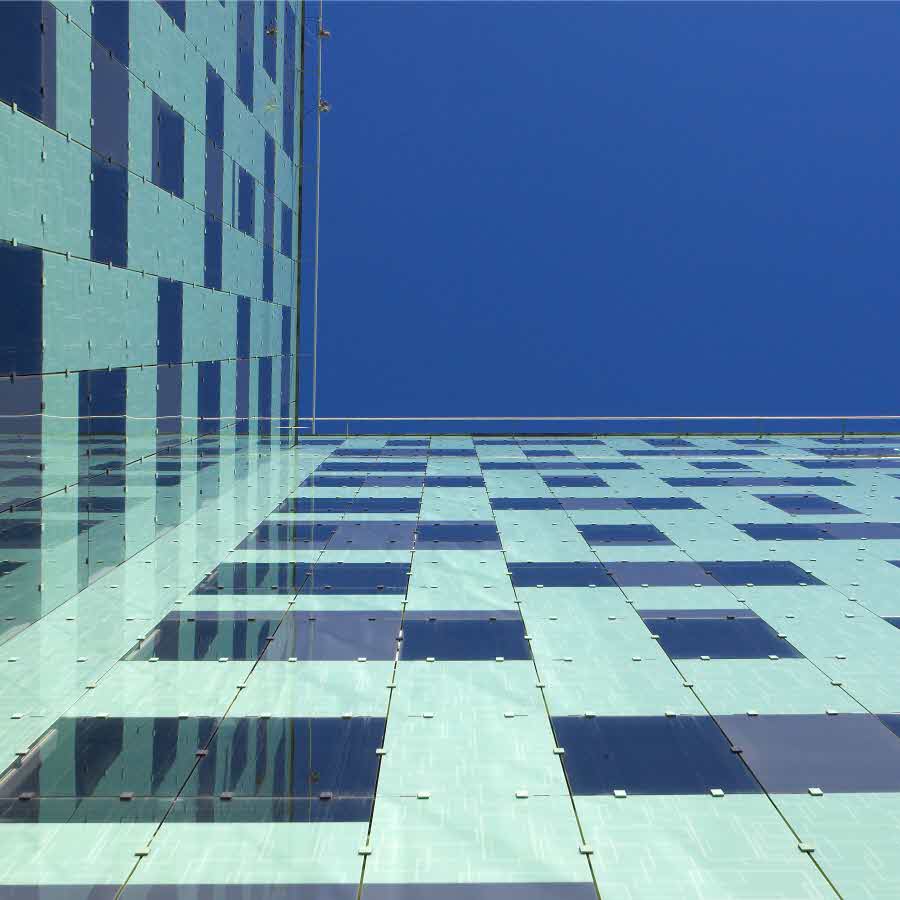 Environment top of the agenda

Boreholes down into the rock bring up free cooling for the building, which reduces the need for district cooling. The thick walls also help store heat and cooling in the building, together with the green glass facade, which a few decimetres outside the outer wall provides protection from the cold.

The building’s interior also features energy-efficient technology, such as low-energy lifts that help produce electricity via the motors, which serve as generators when the lifts descend.

Windows create a greater need for heating requirements in the winter, and lead to a greater need for cooling in the summer, so for energy efficiency reasons the architect has limited the number of windows. They are high up, so the light is distributed in the room. If you look closely, you can see that the window recesses are angled outwards to allow more light in. Another modern and unusual solution in the property is the agreement with district heating supplier Norrenergi, which allows us to sell any surplus energy from the solar thermal collectors. This is a unique solution in the property sector.

Energy requirement less than half the building regulation requirement

The energy requirement for Vattenfall’s offices is less than half the requirement stipulated in Boverket’s (National Board of Housing, Building and Planning) construction regulations. The energy saved each year corresponds to the total energy usage for more than a hundred Swedish houses, and energy consumption is under 50 kilowatt hours per sqm and year. This is just above the requirement for a passive building, but significantly lower than the EU’s GreenBuilding requirement.

Vattenfall’s headquarters have also been certified to Miljöbyggnad Gold standard, which is the toughest environmental classification and means the building must satisfy a number of environmental criteria in the areas of energy, indoor climate and building materials. You also have to reduce energy consumption to meet requirements.

All parts of the building have been created with the environment in mind. The building’s frame was transported by rail rather than truck, all furnishings are recyclable and carpets and textiles are made of wool to avoid the use of flame retardants. The property was constructed with the aim of being Sweden’s most energy-efficient office building.