Next year, SEB will be leaving the big crescent-shaped building in Rissne for three minimalist buildings in bustling Arenastaden. Alessandro Ripellino designed both offices – 25 years apart.

Twenty-five years ago, Bankhus 90, the white building right next to a heavily trafficked crossroads in Rissne, was inaugurated. At that time, the architectural requirements of companies were different from today. In the 1990s, the office was to be a facility that offered everything, and those who worked there should be able to access it easily by car.

Today, more focus is placed on the well-being of employees, and the environment around the office has become more important; it is seen as a competitive advantage that people can meet both at the office and outside of it. Also, banks no longer house large vaults or data centres requiring security, which means that they can be made more public.

“Our basic premise was that the new office shouldn’t be a colossus. It should sync with the city and offer effective meeting places for people in and around the buildings. Also, we wanted it to be easy to make changes to the office and move departments around, for example,” says Alessandro Ripellino, head architect for the project.

SEB’s new office for 4,500 employees is made up of three conjoined buildings just west of Mall of Scandinavia in Arenastaden. The white facade consists largely of glass and features a discreet graphical pattern of triangles that varies between the buildings. The diagonal lines are another characteristic of the buildings. There are staff restaurants on the ground floor, and a branch office will also be opened there.

“We wanted to create a feeling of an active district and have allowed the alleys of the city cross the buildings at several points. This creates a good flow and a pulse, just like in a city,” says Alessandro.

The interior is airy, with white walls and wooden elements in the form of panels, stair railings and tables. Apart from restaurants there are also cafés, an orangery, three atriums with large skylights and an auditorium in the centre of the largest building. When employees want to take a break, they can visit the roof park on the 7th floor, which is almost the size of a football pitch. From there, you can also move between the buildings.

“You can see each other in the new office; employees meet on the open staircase, for example, or on the stands around the atriums that conjure up the image of a theatre. The Rissne office followed a linear process, whereas the principle here has been ‘close and dense’,” says Alessandro.

The health aspect has been important to SEB, which wants many of its employees to cycle to work. The cellar features cycle parking for 1,150 bikes, a changing room and a cycle lounge where you can catch your breath. There is also a full-sized gym hall.

Siemens has moved to Arenastaden, and a new chapter is being written in the technology giant’s history. 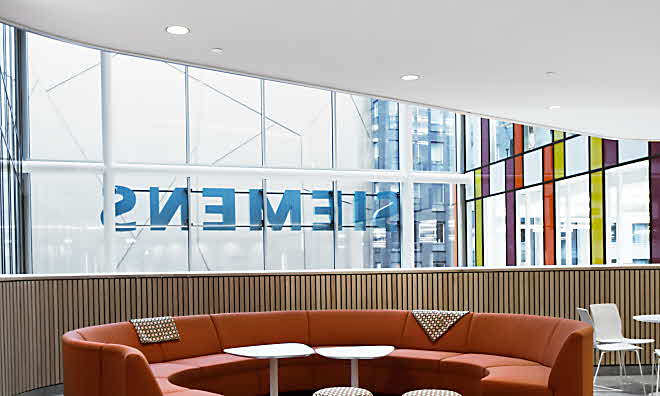 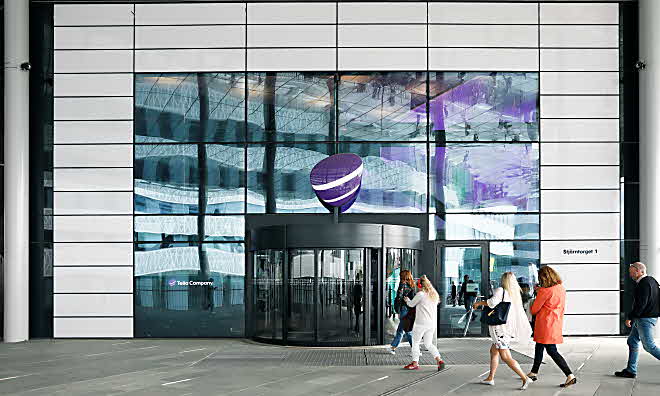