Fabege has signed an agreement with Goodbye Kansas concerning a move to Hammarby Sjöstad. Goodbye Kansas is Sweden's fastest growing company in the animation, gaming and special effects industry. Through the agreement, Fabege is to commence construction of Hammarby Terrassen, where Goodbye Kansas will be taking over the property itself. The green lease contract covers approximately 5,200 sqm, with an annual rent of around SEK 16.7m excluding supplements, and is set to run for eight years. The move is planned for June 2019.

The Goodbye Kansas Group is active in the animation and special effects industry, and is developing at almost explosive pace. In just two years, the number of employees at the company has doubled, and the group has established two overseas subsidiaries. The company is responsible for the special effects used in a range of productions, including the bloodthirsty zombie attacks in the hit TV series “The Walking Dead”, animations and so-called VFX (digital visual effects) to games, feature films and advertisements for customers all over the world. The group also includes the investment company Goodbye Kansas Game Invest and the idea development company Infinite Entertainment.

In addition to the new office facilities, Fabege will also be establishing a brand new film studio in the building.

- “We were looking for premises where we could gather all our activities together under one roof – including our very own Motion Capture studio, which requires a ceiling height of seven metres. The premises also had to be big enough to accommodate hundreds of digital experts and artists in creative and inspiring working environments, at the same time as allowing us to maintain close contact with all the computer games companies in the Södermalm area. The Kopparhuset building in Hammarby Sjöstad is quite simply the perfect building and location to continue to expand the Goodbye Kansas business,” explains Peter Levin, CEO and Co-Founder at Goodbye Kansas.

Fabege is now starting work on the Hammarby Terrassen project – with an investment valued at around SEK 170m – in the Båtturen 2 property. According to the plans, the building is to fulfil the requirements for environmental certification to BREEAM-SE, level “Very good”, and will have a lettable area of over 5,200 sqm when completed. On the basis of the green lease contract, the parties have agreed on a joint environmental agenda for the premises, covering a variety of aspects including the selection of materials, renewable energy and sorting at source.

- “We are extremely excited by the prospect of creating a fantastic office environment and truly extraordinary film studio for Goodbye Kansas. Their energy, growth and creativity are sure to make an even greater contribution to the area, which is already home to a large number of tech and media companies,” comments Klaus Vikström, Vice President and Director of Business Development at Fabege. 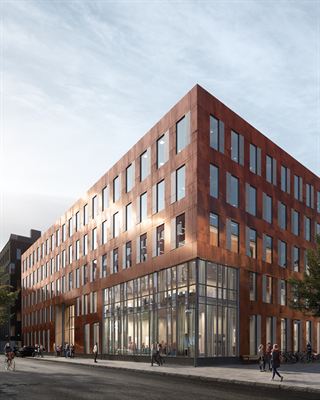