Increased interest in the South side

Fabege has let more than 30,000 m2 in Hammarby Sjöstad and in the area of the Globe Arena. The Pelaren property in the Stockholm Globe Arenas complex is more or less full to capacity before the shell of the building has even been erected. The latest tenant to sign an agreement with Fabege is Ebab –preceded by Stokab, who announced their move from the city centre earlier.

Ebab’s move means that the new office building by the Ericsson Globe in the new Söderstaden district is more or less fully let. Only 900 m2remain available to prospective tenants in the building, which is planned to be completed in summer 2018. The letting agreement with Ebab runs for 5 years and concerns almost 2,200 m2, with an annual rent of SEK 6.6m.

- “We’re seeing a clear increase in interest for the south side of Stockholm, which we as urban developers think is positive in terms of creating a good balance in the city. Thanks to strong brands making their way southwards, the positive trend of increased service, more frequent public transport services and an inner-city feel will continue at a rapid pace,” says Klaus Hansen Vikström, Vice President and Director of Business Development at Fabege.

In addition to the new tenants at Pelaren, Hammarby Sjöstad has attracted many exciting companies, including Firefly and Apegroup. The Swedish Environmental Protection Agency has also fallen for the increasingly popular district and has signed an agreement to move to Fabege’s newly started Trikåfabriken project in spring 2019.

- “We’re incredibly proud of having let over 30,000 m2 of office space south of Slussen in a relatively short space of time. What we can see attracting companies is the trend of even better communications, the range of services, exciting neighbours, events in the Stockholm Globe Arenas and the inner-city feel in Hammarby Sjöstad,” says Andreas Malmsäter, Director of Letting Operations and Marketing at Fabege. 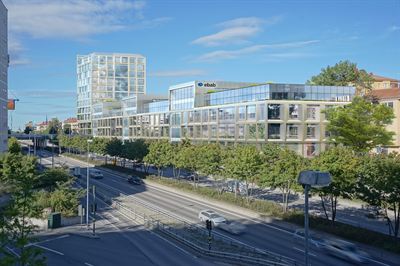