The Tidningshuset building, known by most Stockholmers as DN-skrapan (DN-Skyscraper), has undergone an environmental certification process and received the assessment BREEAM-in-Use Very Good. Fabege has carefully transformed this culturally historic building into a modern office building with a high level of environmental performance and with exciting and surprising content.

The Tidningshuset building was built for Dagens Nyheter and Expressen and was completed in 1963. The Marieberg neighbourhood came to be known as Stockholm’s centre for news. DN and Expressen are still there and were joined later on by Dagens Industri and other media within the Bonnier Group. In time, the neighbourhood has gone from being an industrial building with a printing press for newspapers to being a neighbourhood comprised of many different companies, such as Pontus Frithiof's restaurant, co-working spaces and a wellness facility with swimming pool.

- It’s really neat that the newspapers are still in the building that was built specifically for them, while at the same time the building has been opened up to a completely new range of services. In addition to day-to-day activities, a lot of films and TV series are filmed here. The Tidningshuset building has been a police station and a hospital in Swedish TV series, explains Mattias Nordstedt, Property Manager at Fabege.

Fabege's investments have yielded good results during the environmental certification process. An extensive recycling program, investment in a new, site-based ventilation unit in the basement with Sweden's second largest parallel assembly of rotary heat exchangers significantly reducing energy consumption, as well as the well-equipped bicycle parking complete with changing rooms available to all those working in the house has received high marks.

- We are proud that a 50+ year old received such high marks in the environmental certification process, although we are aware of the systematic, long-term work that is behind the good result. It gives us energy moving forward in our work to certify all of Fabege’s properties by the end of the year, says Sönke Leve, Environmental Certification Coordinator at Fabege.

The building, which is classified as having a high cultural historical value by the City Museum of Stockholm, also has a geothermal plant which helps to ensure that no air cooling is purchased and that the amount spent on heating has decreased considerably. There is also a plant nursery underground for locally-produced herbs and between the houses, a verdant, nicely planted park extends along the walls and property. For those wanting to see the beautiful view of Stockholm there is the carefully restored event space Atelier 23 on the 23rd floor - just below the lettering of Dagens Nyheter and Expressen's well-known neon sign.

In pace with completion of the certification process, the proportion of green funding will also increase from the today’s 57 percent. Environmental certifications have many positive aspects, such as lower financing costs, property appreciation and, above all, an attractive alternative in the commercial real estate market for customers with high sustainability requirements. 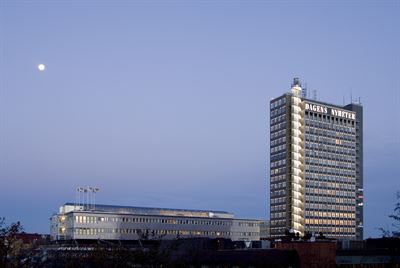 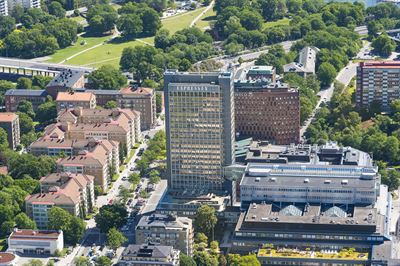