The Land Development Board (Exploateringsnämnden) decided at its meeting on 27 August 2020 to grant Fabege a land allocation permit at Sveaplan. A prerequisite for the creation of the development right, covering about 9,000 square metres, is that Sveaplan is redeveloped in accordance with the city’s plans for Östra Hagastaden.

Fabege owns the well-known Wenner-Gren Center building and the three nearest buildings on Sveavägen. This allows a holistic perspective and co-utilisation of facilities by people using or working in the area.

The city's planned reconstruction of Sveavägen and Sveaplan is within the framework of the detailed plan for eastern Hagastaden that has begun. This means that construction in the land area is dependent on the plans for eastern Hagastaden being realized. Fabege starts its work with the design through parallel assignments to selected architectural firms. A land allotment is an option to negotiate with the city with exclusive rights. 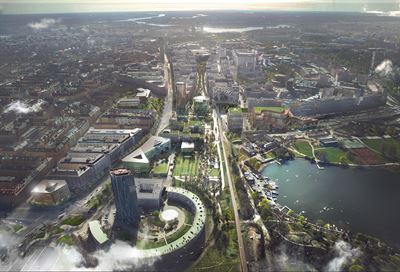