The fast-growing Swedish technology company Mentimeter, with over 80 million customers and users in obver 200 countries, is now moving its Swedish headquarters to the architectural gem Tulestationen in Vasastan, central Stockholm. The premises are located in the old turbine halls by the courtyard, accessible from Tulegatan, and are about 2,300 sqm with a rent of approx. SEK 16m. The contract runs for five years and the company is expected to move onto the premises in April 2021.

Mentimeter has been looking for premises with character that stand out. A venue that is more than just an office, offers flexibility and can be adapted to the latest technology that the company develops. In Tulestationen, they found what they were looking for. Here, history comes face to face with the technology and virtual meetings of the future. In the old turbine halls overlooking the courtyard, Mentimeter has found the perfect place to further develop its business culture.

“It has been important for us to find a place with history and soul where we feel at home. Mentimeter builds a modern technical product and sells it all over the world but we build our culture from our office in Stockholm. We chose Tulestationen and Fabege because they have been very responsive to our needs and agree with our idea of how the modern office should be built,” comments Johnny Warström CEO of Mentimeter

The building was designed by architect Ferdinand Boberg at the start of the last century. It also features Boberg’s famous archway, which has been moved from Brunkebergsverket, Stockholm’s first electricity plant. Entrances and turbine halls are decorated with motifs linked to electricity such as light bulbs, batteries, cable bundles and a very realistic generator. The entire district has been carefully developed over decades for various purposes and for a while housed public service educational broadcaster Utbildningsradion’s production studios, among other things. The entire district including Tulestationen has been certified for sustainability to Breeam In-Use Level Very Good, which is a high rating for a historic building of a relatively advanced age.

“We’re delighted that the interest in new premises remains high and that everything from property tours to signing contracts can be dealt with digitally. Mentimeter is an impressive company, and together we’ll create an inspiring working environment for Mentimeter’s employees and visitors,” says Andreas Malmsäter, Letting Manager at Fabege. 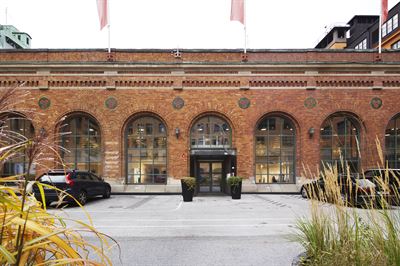