The distinguished Hagahuset building in Solna, which is owned by Fabege, houses Hotel Giò – a hotel and restaurant which takes its inspiration from Italy. The hotel opened during the spring of 2020 and today, as one of three finalists, it was awarded the Solna Urban Environment Prize 2020.

Hagahuset was designed during the 1950s by the architect Stig Annerfelt who was inspired by architect and designer Giò Ponti’s contemporary Pirelli Tower in Milan. It was constructed as an administrative headquarters for the county council, and at the time was Sweden’s largest and most modern county council building. After having been crowded with office workers for more than 60 years, the characteristic stairs, works of art and doors of the period in the Hagahuset building now instead welcome guests at Hotel Giò.

Utilising the building’s fantastic character and details combined with sustainability have been watchwords in the renovation of Hagahuset and in the opening of Hotel Giò. Among other things, a decision was taken to enlarge the windows on the ground floor, and this work thus interfered with the façade of the listed building. This was made possible after original drawings showed that the window sizes corresponded to the original design from the 1950s, which has resulted in a bright and open ground floor.

“It has been a fantastic journey to be able to create Hotel Giò together with Kom Hotel. We have had a common vision about trying to preserve the Hagahuset building’s feel and charm by considering its great qualities and meticulously designed details, which I really think we have succeeded with,” says Johanna Axe Skoglund, Project Manager at Fabege.

Kom Hotel is owned by KFUM Central, which is a non-profit organisation that for almost 140 years has run various activities for young people in sports, camps, culture, integration and international work. The organisation has a long tradition of running a hotel business, and opened its first hotel, Hotel Excelsior, in 1910. On 31 March, they opened the doors to a meeting place for everyone who wants to stay, eat, socialise and work in a warm and unpretentious environment with a slightly loving atmosphere. The specially designed interior of Hotel Giò combines with the original details of this well-known building.

“With the inspiration from the Italian 50's, we hope to offer a fantastic hotel experience, at the same time a chance to experience Solna. We are both happy and very proud that the new hotel is appreciated and noticed in this way by the City of Solna,” says Michael Lagerkvist, chairman of KFUM Central.

The Solna Urban Environment Prize is presented annually by the building committee for a building, facility or other project in Solna that has made a lasting improvement to the urban environment. This year's winner was announced by the City of Solna on 2 December 2020, with the motivation:

“The exterior changes have been made with great consideration for the building's character and using the original details as a model. Great emphasis has been consistently placed on design, sustainability and smart digital solutions. The specially designed interior combines with the original details of the well-known 1950s building.” 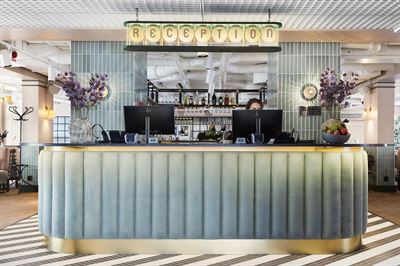 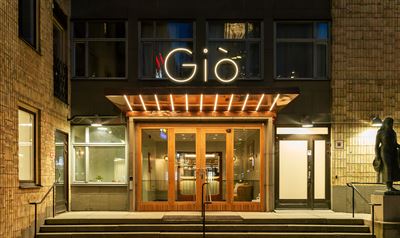