Fabege has signed an agreement with Elgiganten regarding moving to Franzéngatan 6 in the Glädjen district. The design and adaptation of modern office space, training facilities and a pleasant courtyard is now underway in consultation with Elgigantent. The agreement covers nearly 2,300 sqm and will run for seven years. The building will be ready for occupancy in September 2022.

Västra Kungsholmen is an area that is continuing to develop at a rapid pace and is one of the last major expansions of the inner city. Its location on the shores of Lake Mälaren and its immediate proximity to Östra Kungsholmen’s Stenstaden district have contributed to its popularity for both business and residents. Fabege is in full swing with the renovation and modernization of the property Glädjen 12 of just over 11,000 sqm.

“We are very pleased with the great interest in Franzéngatan 6 in Västra Kungsholmen and the fact that we have now signed two key contracts in the Glädjen district. Discussions continue about letting a floor higher up in the building,” says Andreas Malmsäter, Letting Manager at Fabege.

Hornsbergs villastadwas an area created at the end of the 19th century that never became a major success, despite the romantic district names such as Tillflykten (Haven), Glädjen (Joy), Lyckan (Happiness), Kojan (Cabin), Paradiset (Paradise) and Lustgården (Garden of Eden). The roads were also named in a similar style, such as Rosenstigen (Rose Way), Jagarstigen (Hunter’s Way), Ulvstigen (Wolf Way) and Lärkstigen (Larch Way). Thanks to the large housing project initiated in the early 2000s, the industrial character of the entire area changed to what Hornsbergs strand is today, a popular residential area with a waterside promenade and views that attract visitors from all over Stockholm. Fabege currently owns the properies Glädjen 12, Paradiset 23 and Paradiset 27.

“We are really looking forward to moving into Franzéngatan6. For us, it is important to be a modern company that can give all our employees the opportunity to work in an inspiring environment with a focus on modern solutions. Our new office gives us excellent opportunities to commute mainly by public transport, and the central location makes it possible to cycle or walk there as well. We think this is an important aspect that is fully in line with our values and sustainability efforts,” says Niclas Eriksson, Managing Director of Elgiganten

In 2012, Hornsbergs strandpark was inaugurated, stretching 400 metres along Ulvsundasjön bay in Västra Kungsholmen and making it possible for Stockholmers to walk around Kungsholmen beside the water. The area is 14,000 sqm and includes footpaths, Kajparterren (a slightly raised horizontal disc slightly leaning towards the water), unhewn stone, a number of jetties for swimming and sunbathing, and gardens with space for picnics and even salsa courses. The quay’s wide promenade, with its many restaurants and a few houses on the green slope down to the water is a natural place to stop for coffee for those taking a stroll around Kungsholmen – which incidentally is a lovely walk of almost 10 km, with many of Stockholm’s most beautiful views. 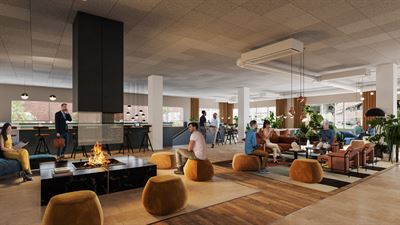 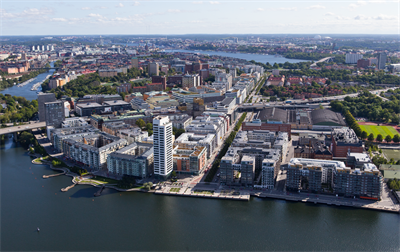