Fabege and Skanska Sweden are together acquiring approximately 150,000 square metres of land, which has become available as a result of the Mälarbanan railway line being expanded and partly put in a tunnel. This creates the conditions for extensive urban development, with space for 1,000 new homes and 2,000 new jobs next to Solna Business Park and into Huvudsta.

New opportunities for urban development with green city districts, housing and workplaces have arisen as a result of the Mälarbanan railway line being expanded through Solna and part of it being put in a tunnel. Fabege is acquiring land to create approximately 52,000sqm of office space and approximately 10,000sqm of housing. The purchase price for the land is approximately SEK900m, which will be paid to the city of Solna as the new urban districts are built. The construction start for the expansion of the Mälarbanan is planned for 2023 and the new buildings are expected to be built between 2030 and 2040.

“The development of central Huvudsta is by far Solna’s largest and most complex urban development project, as the railway will be put underground and lined with new buildings. It therefore feels good that we are working with two companies that have extensive experience of urban development in complex metropolitan environments,” says Pehr Granfalk, Chairman of the Municipal Executive Board in Solna.

The Municipal Executive Board in Solna is expected to approve the agreement on 29March 2021. The proposed local development plan will have its consultation phase in spring 2021.

“Along with our current development of Arenastaden, Haga Norra and Solna Business Park, the land acquisition is a natural addition that contributes to new value-creating opportunities in Solna in a long-term perspective. The geographical location and Solna’s many advantages mean that we are keen to increase our portfolio in the area,” says Stefan Dahlbo, President and CEO of Fabege.

150,000 square metres of land for new housing, nursery schools and workplaces
In addition to Fabege’s acquisition of land for offices and homes, located close to the start of the tunnel in Huvudsta and next to Solna Business Park, Skanska Sweden will also acquire land to build approximately 85,000 square metres of housing with premises for restaurants and other service outlets at the street level, as well as two nursery schools and a communal home for supported housing.

The urban development will reduce the barrier currently formed by the railway, as new buildings will link the districts of Huvudsta and Skytteholm together with central Solna. At the same time, public transport accessibility will be improved in the area as a result of a new commuter train station in Huvudsta and a new station entrance in Solna Business Park for Sundbyberg station. 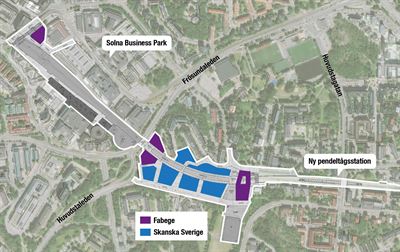 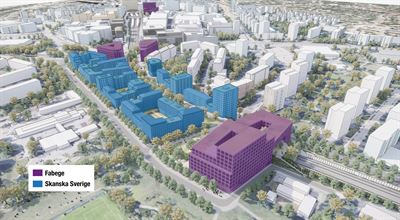