The City of Stockholm has agreed to allocate the leasehold property Korphoppet 6 and adjacent Korphoppet 7 to Fabege. Both properties are part of the ongoing local development planning work for the Sjöstadshöjden area, which aims to connect Hammarby Sjöstad with Hammarbyhöjden.

It is proposed that the raised road Hammarbyvägen and the lower-lying Hammarby fabriksväg be merged at the lower level and developed into an urban street, with buildings along both sides. The intention is to create a safe, attractive, contiguous urban space with approximately 4,000–5,000 office workspaces, hotels, housing, a square and active ground floors with commercial premises facing the street.

Fabege is the owner of the surrounding properties along Hammarby Fabriksväg and the leaseholder of Korphoppet 6, where Volvo Cars currently has a car facility. Korphoppet 7 is a small, undeveloped area between Fabege’s properties that is currently being used as a works tunnel for the extension of the blue metro line. There will be two new metro stations in Hammarby Sjöstad, linking the district to the inner city and forging a stronger connection with Nacka to the east and Hagsätra to the south. In order to enable contiguous urban development at Hammarby Fabriksväg, it is proposed that Fabege acquire Korphoppet 7 in addition to Korphoppet 6. The future size of the permitted building is to be determined during the planning process, but is estimated to be around 22,000 sqm. The city’s plans include the rerouting of pipes on Hammarbyvägen and the lowering and rebuilding of Hammarbyvägen, which means that the project will probably not begin until 2026/2027.

“Hammarby Sjöstad is a city district that is close to our hearts, with a good mix of housing, offices, schools, culture and service. Last year, we acquired the Påsen 1 district and were allocated Korphoppet 5. Combined with the new land allocation, this provides us with excellent conditions to expand Sjöstan’s vibrant urban character and attractive working environment to the south,” says Fabege’s President and CEO Stefan Dahlbo.

The decision on land allocation will be taken by the Land Development Board on 26 August. Land allocation implies an exclusive option to negotiate with the City on a development agreement, including a contract to purchase the land. 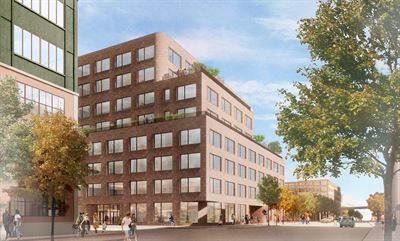