One of Sweden’s largest and most attractive office buildings

As you arrive to Arenastaden, you are greeted by the SEB-huset building, with its beautiful facade.

It’s impossible for anyone visiting Arenastaden to miss Sweden’s largest office building. With its stunning white and grey facade, the building has become a natural part of Arenastaden. Here, SEB has its largest office, which can accommodate approximately 4,500 workspaces, along with several dining halls and cafés, a service centre, auditoriums and an exercise facility. It’s simply like its own little town in Arenastaden.

We’re extremely proud of the beautiful offices we’ve created together with SEB. Offices where the focus was on sustainability and meeting places for modern working life. In 2017, the building was voted ‘Sweden’s Most Attractive Office’, and the feedback we’ve had is that the employees are happy with their new home in Arenastaden. We’re very pleased about that.

The fantastic atriums invite people to have spontaneous meetings, and the white combined with strong colours creates a pleasant impression.

The facades of the seven to 14-storey high buildings are clad in modern, stylish glass. The three buildings are connected both above and below ground; a solution that simplifies collaboration and spontaneous meetings between the bank’s various departments. The roof features both plants and solar panels.

With its 97,000 square metres of BTA and 4,500 workspaces, the project is one of Sweden’s largest offices. However, the separation of the buildings gives the appearance of a normal city block. Movement in and around the buildings is a central theme when connecting and organising various locations in the open office layout with the city outside. Like a town within a town.

Instead of constructing a single, large building, three entirely separate buildings have been created that together form two blocks. This helps maintain the flow of the district. The various structures are linked by footbridges to aid movement between the buildings and create cohesion between the different floors.

Facade that reflects its surroundings

The buildings have been designed as three clear-cut crystalline forms clad in glass. The bearing steel construction has been individually designed for each building and inspires the varying patterns on the facades, which are screen-printed in white. The glass reflects the surroundings in a thematic way, while the printed pattern lends a shifting shadow effect to the underlying facade.

"The design is based on the concept that crystals and the glass give the facade a lightness, with both depth and transparency. The glass is characterised by a pattern that combines to form an overall concept."
Allessandro Ripellino – Architect 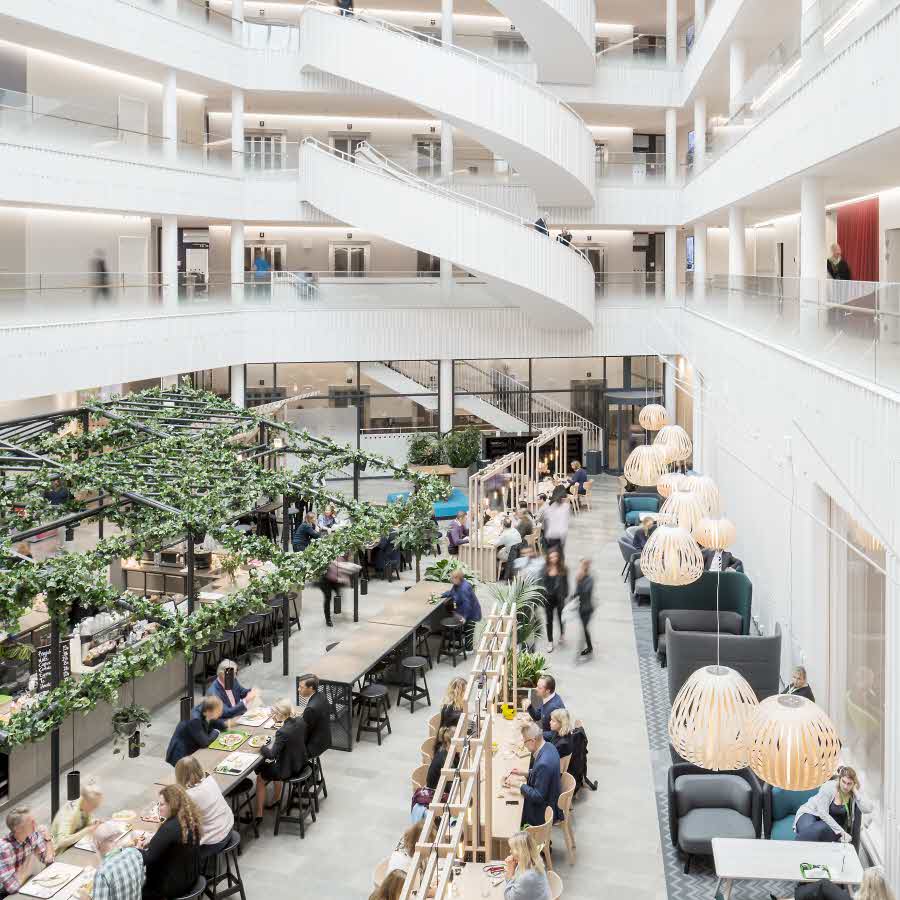 Several atriums where employees can come together and hold external meetings. 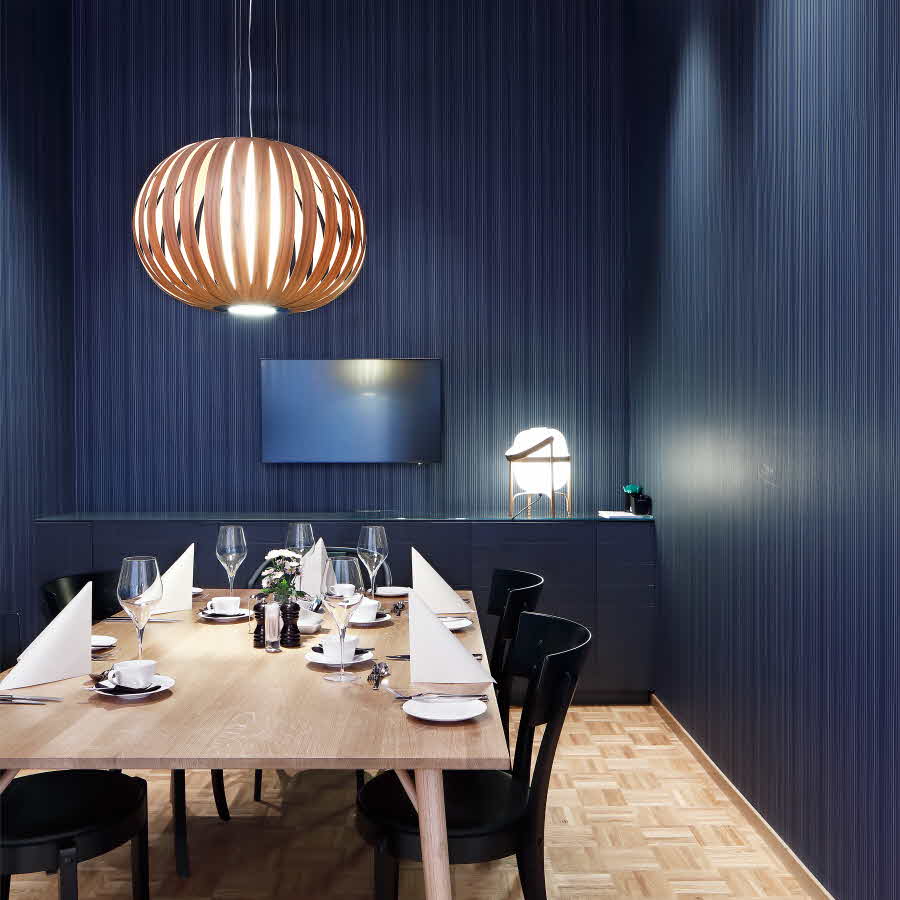 600 meeting rooms with a variety of colours and designs. 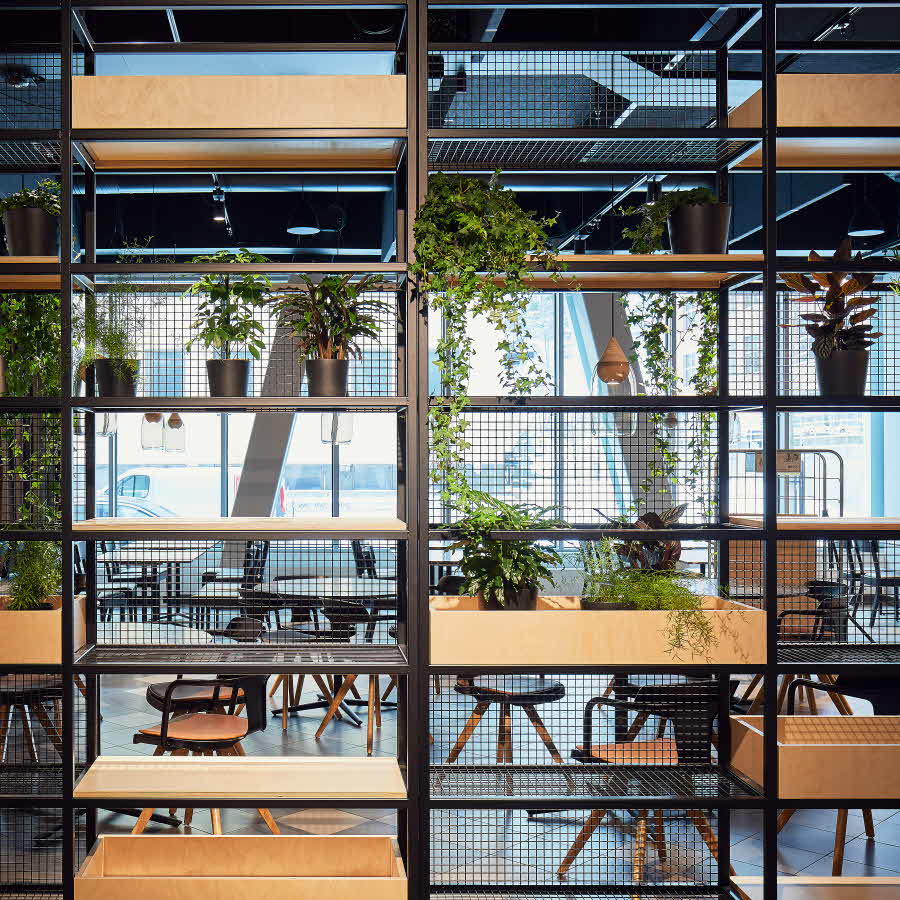 The building is already environmentally classified according to BREEAM Excellent, with low energy consumption, own electricity production via solar cells and bicycle garage, but has recently also been certified to Fitwel's health certification with a focus on health where the certification is achieved via a points system. Healthy food, access to fitness areas, proximity to public transport, green spaces, good air quality and lighting are just a few of the criteria for which points are awarded. The SEB office ended up at the highest possible level and is therefore the first property in Europe to be certified with three stars.

The buildings are linked together above and below ground. It is also possible to walk between the roofs, which have landscaped parks featuring a wealth of different plant varieties.

Read more about the Fitwel certification Today it’s hard to imagine how the district looked previously. Before Mall of Scandinavia, Friends Arena, the contemporary office buildings and the vibrant urban scene. Arenastaden is now a fully sustainable district with top quality housing, offices, hotels and communications.