New urban districts with a focus on people

Haga Norra is a brand new city district near Arenastaden and Haga Park, with timeless architecture that flirts with the early 20th century style, taking inspiration from Paris and Copenhagen. A district with a unique character and small-scale services, just a few minutes from Stockholm city centre.

It is an area that has been designed from the ground up with well-being in mind. We mix office buildings with residential elements and provide a rich range of services including local bars, cafés, retailers and bakeries. All the service premises are located on the ground floor of the buildings, to ensure that there is always life and movement in the area. Visitors and residents can feel safe and welcome everywhere.

Haga Norra is a district that takes both people and the Earth into account. Modern technology minimises energy needs and makes the buildings smart and adaptable.

Modern offices shaped to meet the needs of businesses

Visiting our first office complex in Haga Norra - Block 1 - is like taking a step into the future. But with one foot remaining in the architectural industrial look, with brickwork and large mullioned windows. A lot of the material has been recovered from old buildings.

An exciting journey awaits companies that move to Haga Norra. Not only do they get to shape their specific premises, but they can also help shape the entire area. And the companies also get to be in an exciting overall context, with close proximity to the city centre and Arenastaden, which is home to the head offices of some of Sweden’s largest companies, as well as the Mall of Scandinavia and Friends Arena. Two city districts with different characters - the best of both worlds.

The area will have 27,000 square metres of office space, with moving in scheduled for 2024. Two lovely courtyards can be used as communal areas by tenants, the ground floors have restaurants, cafés, gyms and bicycle parking alongside each other, and there is underground car parking in the basement.

The interiors of the buildings are carefully planned to make it easy to adapt the premises for tenants, now and in the future. This can be done without having to make major changes, thanks to smart technology installations and well thought-out material choices. The right material, in the right place - from the start.

The location, near Arenastaden, Solna station and the E4 motorway, means that it is easy to get to Haga Norra, via several different transport options.

Bilia has moved into its new office in Haga Norra. Here the company has developed and opened up the doors to one of Europe’s most modern car showrooms. 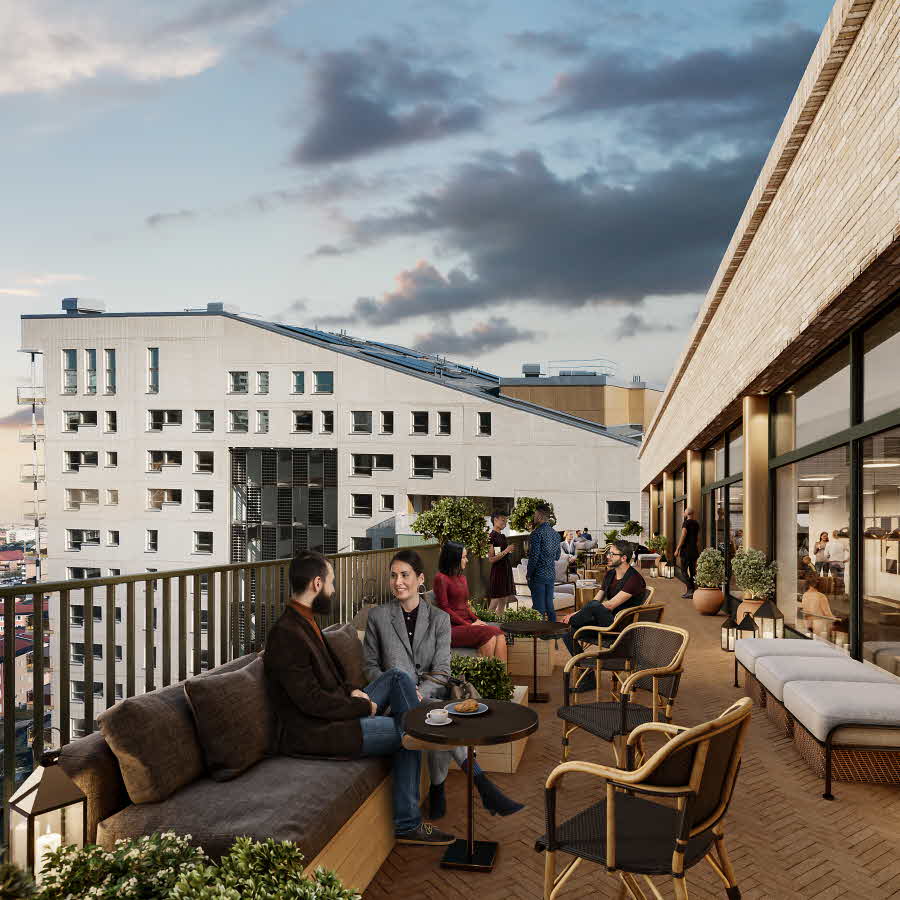 Terrace in Kvarter 1. In the background is the Bilia building, with a showroom on the bottom floor and residential units above that. 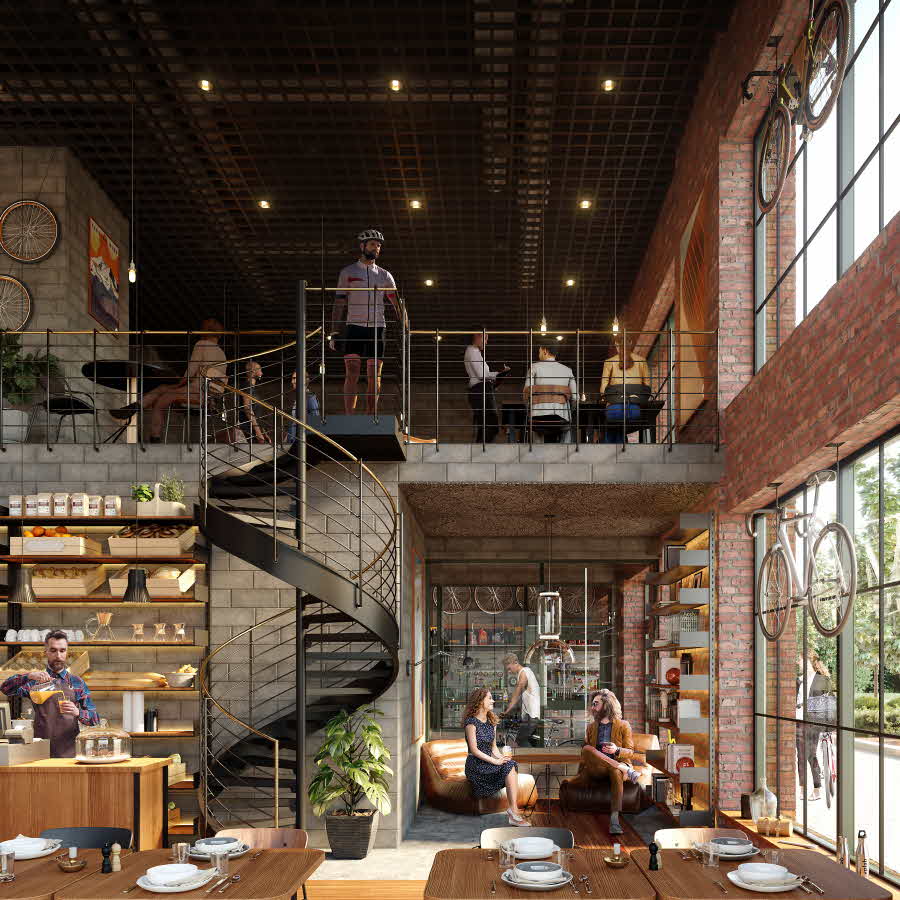 - A location that is hard to beat

Haga Norra has a fantastic location in terms of its transport links, whether you take your bike, the commuter train, the light railway, your car or the bus.

The area is being developed so that it is optimised for bicycle and pedestrian traffic. There is a bicycle pool, bicycle parking, a bicycle café and a repair workshop. All the shops and restaurants are located along the main pedestrian routes. There are excellent bicycle connections to the city centre.

Solna Station is a 4-minute walk away, and from there Stockholm central station is only 7 minutes on the metro and Odenplan is 4 minutes by train. The light railway gets you to Solna Centrum in just 2 minutes and to Sundbyberg Centrum in 7 minutes.

When the new metro line comes to Arenastaden, an exit is planned close to Haga Norra.

Although the district itself is optimised for cyclists, we are building several car parks underneath the buildings to make it easy to get to and from Haga Norra by car. Car pools with modern electric cars are also available.

The first homes in Haga Norra have been sold and the first residents have already moved in. The apartments have access to a gym, rooftop terraces with outdoor cooking areas, and co-working space.

We are developing the next phase of residential properties together with our housing developer SHH Bostad, with sales expected to start after summer 2022.

Read more about the residens at shhbostad.se

Send an expression of interest 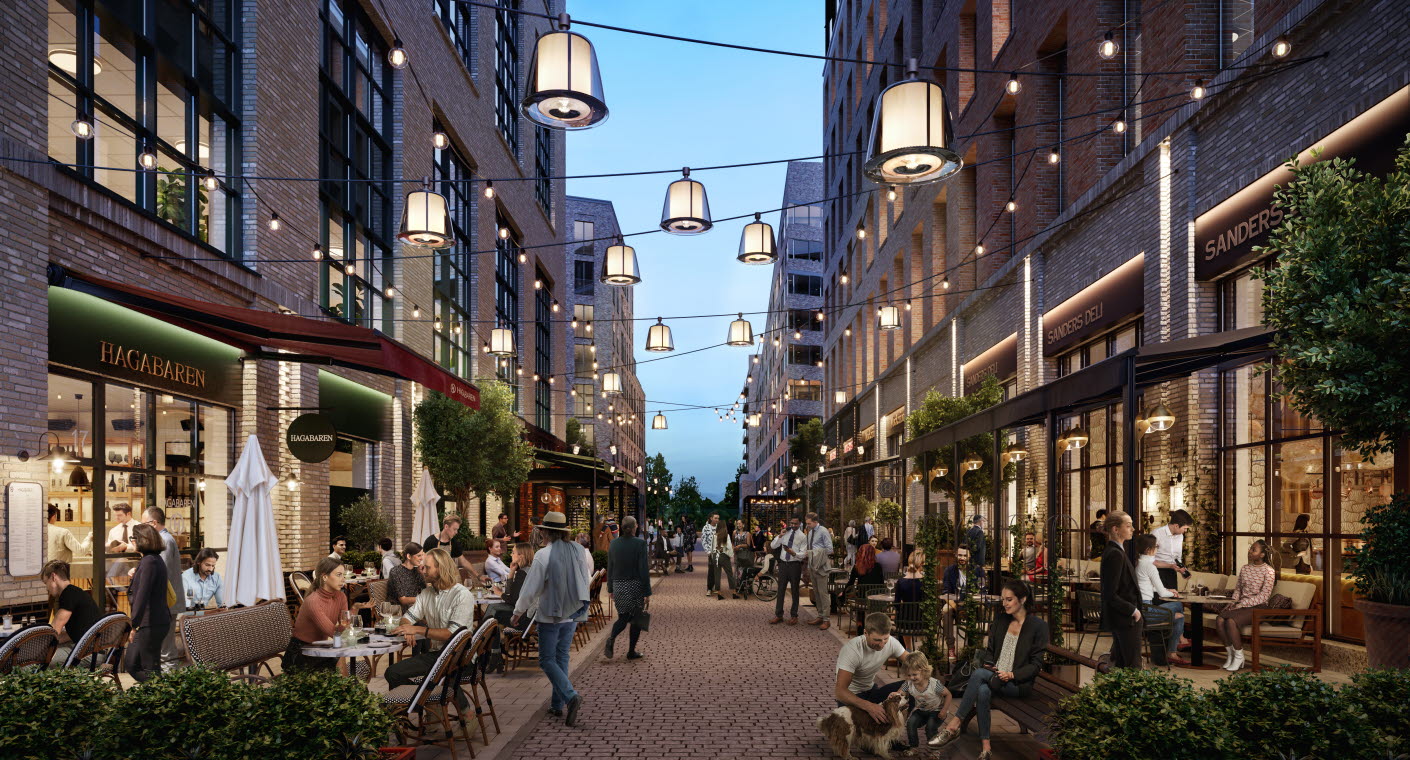 How is a new modern city district built on a relatively complex site in an existing city? Working closely with the urban planners at Gehl, we took the step to create what is now the new Haga Norra district.

For us at Fabege, the basic idea from the very start was that Haga Norra would be built with a focus on people.

“What is special about Haga Norra is that Solna is in general planned in a completely different way. It is also special because it is big; it is far from being just a nice little townhouse project, it is instead a whole city district we’re talking about.”

Esben Neander Kristensen, of Gehl, who has worked on popular areas in San Francisco, Copenhagen and London.

We thought in a new way, but with an eye on history as well. Because the city of the future is in some respects similar to the one that existed over 100 years ago, although built with the most modern technology possible.

The planning of Haga Norra is well thought out in terms of its functionality, with each part of the district having specific functions, but the various parts being mixed. This is, for example, Matgränden (food alley). A hyper-activated area with restaurants, delis and smaller-scale services. Restaurants serve food inside and outside throughout the year, and this is possible outdoors due to the planning of the space itself, and also due to the right choice of materials and lighting.

Haga Norra is being created with sustainability at its core. Many of the buildings are built with recycled materials, ranging from frames to windows. The interiors of the offices are built with timeless, high-quality materials. With direct proximity to all possible services that are needed in everyday life and with a location close to Stockholm city centre, we reduce the need to use a car.

The entire city district is being developed in line with the UN’s global climate goals and all the buildings are being environmentally certified to reduce their impact on the climate. With electricity generated from solar cells on the properties, electricity purchased from wind power sources and heat from geothermal energy, we are safeguarding the district’s energy needs for the future. The stormwater management system is designed to cope with heavy rainfall and roofs will be green sedum roofs that capture rainfall.

All the buildings being constructed in Haga Norra will be connected digitally, to allow analysis of building usage data. Conclusions from this data can then be used to energy-adapt each building and smooth out the energy demand between offices and homes.