From 2 March 2020 [P1] MTR Express is extending its rail connection to Solna Station, allowing passengers to travel directly between Gothenburg and Arenastaden. Given the large number of businesses and workplaces in Arenastaden, MTR Express hopes more business travellers will now choose to travel by train from Gothenburg.

They are starting with one morning departure from Gothenburg and one departure in the afternoon back from Solna Monday–Friday, but from 14 April MTR Express hopes to increase this to two departures per direction on weekdays.

MTR Express launched its express train service between Stockholm and Gothenburg in March 2015. The company has been named Sweden’s best train company four years in a row by the Swedish Quality Index and has been the most punctual of all train and airline operators on the route for three consecutive years. They operate up to 114 departures a week between Stockholm and Gothenburg, 10 of which stop at Solna from 2 March, with a plan to increase this to 20 a week from 14 April.

“We’re delighted to offer all passengers between Gothenburg and Arenastaden in Solna a direct connection. We have a lot of business customers in Arenastaden who wanted us to extend our route there, so we hope that lots of business travellers will now take the opportunity to enjoy punctual, hassle-free, low-carbon travel between Gothenburg and Solna,” says Mats Johannesson, CEO of MTR Express.

On Monday–Wednesday the train departs Gothenburg at 05:50 and arrives at Solna at 09:11. On Thursday–Friday the departure is at 07:55, arriving at 11:26. The train back from Solna leaves at 17:33, arriving in Gothenburg at 21:05 on Monday–Thursday and 14:48–18:30 on Fridays. From 14 April MTR Express hopes to add a further morning departure from Gothenburg and an extra departure back from Solna in the afternoon, and is currently awaiting approval from the Swedish Transport Administration.

Tickets are already available to purchase at mtr.se and through travel agencies.

Arenastaden is the location of the Westfield Mall of Scandinavia, the Friends Arena, large companies in modern office buildings and a vibrant urban environment. 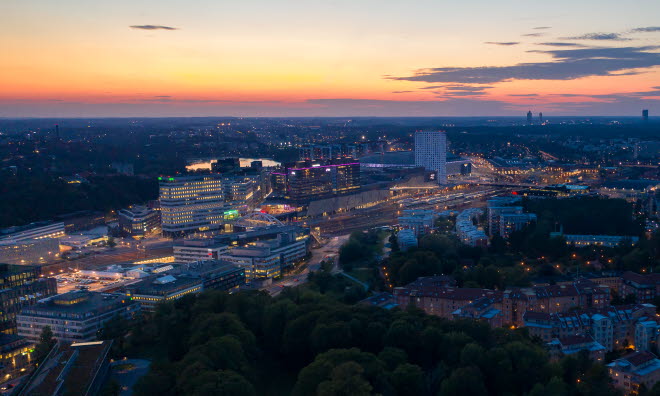