Since 2004, the Solar Energy Association of Sweden (Svensk Solenergi) has annually highlighted the industry’s most innovative ideas and achievements. The aims with this are to increase the focus on solar energy issues, to contribute to increased solar electricity and solar heating in Sweden, and to spread knowledge and arouse curiosity about the solar energy industry’s most spectacular projects.

At an award ceremony held on 17 February, Scandinavia’s first zero-energy hotel, Nationalarenan 3, which is owned by Fabege and operated by the Choice Group under the name Comfort Hotel Solna, was awarded a Solar Energy Association of Sweden honourable mention, with the following justification:

“The jury gives Fabege’s solar energy installation at the House of Choice an honourable mention in the Facility of the Year category. The solar energy facility has been aesthetically integrated into the design of the building and is an important part of the system that has made Scandinavia’s first zero-energy hotel possible.

In order to achieve maximum electricity production, high demands have been placed on the design of the solar panels and the building. The sawtooth-shaped roof provides a large surface area for solar panels and the integration of solar panels with various colours and shapes into the façade contributes to the natural aesthetics of the building. House of Choice is a project that shows in many ways how we can build a sustainable society together – for real!”

Nationalarenan 3, located in Arenastaden, is certified as a “FEBY Gold Plus Building”, and thanks to its 25 geoenergy boreholes and nearly 2,500 sqm of solar panels on the façade and roof, it can produce more energy than is consumed by the running of the property during the year. The south-facing façade and roof are both covered in solar panels, which generate enough energy in one year to power an electric car for more than 40 trips around the globe. This means the hotel has the most solar panels per square metre of any hotel in the world and that the building achieves zero energy status.

“We are passionate about continuously raising the bar in terms of sustainability, and have a goal to produce even more renewable electricity locally. High on our wish list right now are greater opportunities to share electricity between our properties and more information about the climate footprint from the entire production chain for solar panels, to make it easier to make wise choices at every stage,” says Maria Jansson, Project Manager at Fabege AB and developer for Nationalarenan 3.

The 11-storey building consists of three sections: a hotel with 336 rooms, 88 long-stay apartments and an office part, where Nordic Choice Hotels has its Swedish head office. The hotel also has restaurant and conference areas, and a lobby. 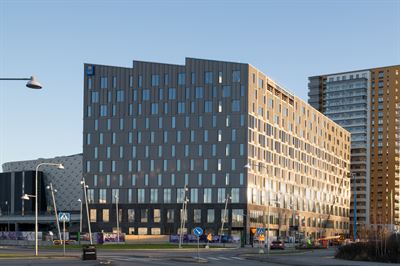 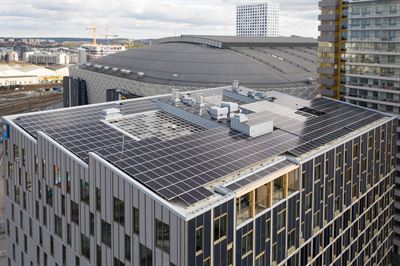 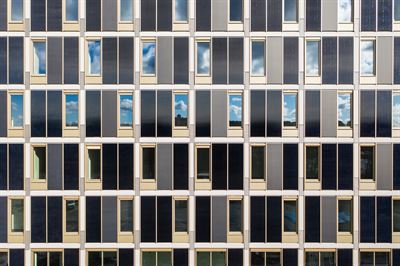